(Cross-posted at the TudorHistory.org blog)

While this is only tangentially Tudor-related, Foose reminded me in comments to the Elizabeth open thread that I wanted to comment on the passing of Deborah Kerr. (And yes, I'll do some more "open threads" in the future on some other topics, since it was kind of fun to read other people's thoughts on "The Golden Age").

I first really got into the Tudors when I was about 14 years old, which was also about the time that I really got hooked on watching old movies. I think it was around this time that American Movie Classics and channels like that starting popping up and I fell in love with some of the old movies (not to mention forming crushes on some of the actors, in particular Cary Grant and Yul Brynner). So, of course, I started seeking out old historical movies, and I'm pretty sure the first Tudor one I watched was "Young Bess" (1953). Jean Simmons and Stewart Granger (who were married to one another at the time) star as the young Elizabeth and Thomas Seymour, Charles Laughton reprises his role from "The Private Life of Henry VIII" (1933) as the big king himself and Deborah Kerr played Katherine Parr. Interestingly, the boy who played Edward VI in "Young Bess" would go on to play the son of Kerr's character in "The King and I" (one of my all-time favorite movies).

When the news came out the Deborah Kerr had died, the coverage mostly mentioned the famous kiss on the beach in "From Here to Eternity" and her roles in "The King and I" and "An Affair to Remember", but I also thought of her in the role I first saw her - Queen Katherine Parr in "Young Bess". 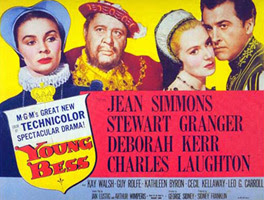 Image from Wikipedia
at October 21, 2007 No comments:
Email ThisBlogThis!Share to TwitterShare to FacebookShare to Pinterest
Labels: History

Confessions of a Nobel Prize junkie

Yep, it's true, I'm a Nobel Prize junkie. I eagerly await the announcements every year, especially Physics and Peace. This year the Nobel folks set up RSS feeds so you can find out almost instantly when the prizes are announced (provided you are sitting at your computer in the early morning hours US time) and have links to videos of the announcements, summaries of the work the prizes are awarded for, etc. They have more info on the prizes and my favorite sections - "Memories of the magic call".

So, given this, you can imagine how thrilled I was to be able to sit and chat briefly with last year's Physics co-winner, John Mather, who was here to give a couple of lectures and receive the Antoinette de Vaucouleurs memorial medal. Like an idiot though, I forgot to ask him about "getting the call"! D'oh! I also have never asked Steven Weinberg about his call for some reason. Well, if he asks me to help him with graphics for a Power Point presentation again, I'll have to turn into a fangirl and ask him. :)

And yes, I was very pleased with this morning's announcement of the Peace Prize, given jointly to Al Gore and the IPCC. To show what a total Nobel geek I am, we typically flip the TV on as soon as the alarm goes off and turn it over to the news. Knowing that the announcement was made about two hours before we got up, I instantly started reading the "crawl" across the bottom of the screen (something that usually annoys the heck out of me but was quite useful this time!). About the third or fourth story that came across started "Vice President Al Gore..." and I knew that he had won. I wonder if this the first time someone has won an Oscar and a Nobel in the same year?

And to finish my thoughts about the Physics prize in particular, it still amazes me that some of the experiments we did in the first year quantum physics lab won people Nobel prizes a century earlier. It just goes to show you how quickly science advanced in the 20th century!
at October 12, 2007 No comments:
Email ThisBlogThis!Share to TwitterShare to FacebookShare to Pinterest
Labels: Astronomy and Space, Random Geekiness, Science 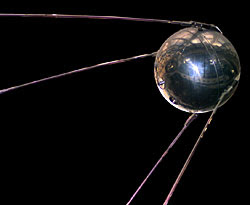 I was going to say a few things about the 50th anniversary of the launch of Sputnik, but it looks like Phil Plait at Bad Astronomy already wrote a lot of stuff along the lines I was thinking!

Here's a NASA page (where I took the picture from) about the spacecraft and a Science@NASA page where you can hear the beep and learn more about communicating with spaceprobes, like the one on its way to Pluto.
at October 04, 2007 No comments:
Email ThisBlogThis!Share to TwitterShare to FacebookShare to Pinterest
Labels: Astronomy and Space, Science
Newer Posts Older Posts Home
Subscribe to: Posts (Atom)