Game of Thrones Exhibition at SXSW 2014 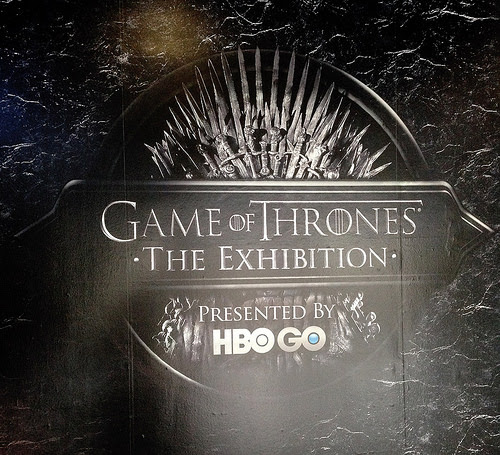 One of the great advantages to living in Austin is that, even if you don't get SXSW badges and/or wristbands, there are plenty of great free events that also happen in Austin during that time. Last year, it was the NASA tent and the JWST model, this year, it was the Game of Thrones exhibition! They only allowed camera phones so these aren't the greatest photos ever, but I've uploaded the better ones to Flickr. The picture above goes to the full set. (Warning: there are spoilers in some of the photos!)
at March 23, 2014 No comments:
Email ThisBlogThis!Share to TwitterShare to FacebookShare to Pinterest
Labels: Photography, Random Geekiness

This is the obligatory Happy New Year post, but also another place for me to put some of my 2014 goals (note - not 'resolutions'!) to keep myself honest about them. I'll also be posting on twitter and a few other places.

The first thought I had for a goal is specifically connected to this being 2014, which is the 450th anniversary of the birth of William Shakespeare. I have been on a bit of a Shakespeare kick lately anyway, so I don't expect this one will be TOO hard to achieve: to read/watch/listen to all of Shakespeare's plays. I'm going to read a sonnet a day too as a bonus. I'll mostly likely be tweeting and blogging about this particular goal through my Tudor history accounts, etc.

The next one is a typical "lose weight" - in this case to continue losing weight since I had already lost about 10 pounds in the last few months of 2013 once I decided to kick myself in the arse about it. No, you're not going to get my goal number here, but I will say the goal date is at the end of July when we have our summer board meeting out at the observatory.

Another, probably fairly typical, is to continue decreasing my credit card debit. Again, no numbers, but I'd like to get half of my revolving balance on one of my big cards paid off. (Sadly, I'll still have one other large one, but I hope to continue chipping away at it too.)

The next two are related to the vast pile of craft projects in various states of completion. My goal is to frame (or finish into ornaments or whatever) six projects that I've already completed the stitching on and to finish the stitching on 10 projects (small ones count!). I'll most likely just post about those on Lara's Loose Threads.

The rest are book related. I've got a huge stack of books that authors and publishers have so generously sent me over the years and I've been really bad about writing reviews of them. So I'm going to set the goal of writing 10 book reviews for my Tudor history blog. I've already read several of the books, but I just need to sit down and review them! And for reading in general, I've set my 2014 Reading Challenge at Goodreads to 30 books, which should be doable since it includes all the audiobooks that I listen to driving to and from work.

So, let's see how I do! I'll go over the list at the end of the year and tally them up.
at January 01, 2014 No comments:
Email ThisBlogThis!Share to TwitterShare to FacebookShare to Pinterest
Labels: Site news
Newer Posts Older Posts Home
Subscribe to: Posts (Atom)