See girls CAN do science!

Not only were all three top winners girls, but 47% of the entrants this year were girls. Woo-hoo! After just finishing the audiobook of Susan Jacoby's "The Age of American Unreason", this was just the little pick-me-up I needed. Now if more Americans could locate Iraq on a map... but I digress.

This is one of those news stories that at first glance, I'm very happy to hear, but then upon further thought, I wish it actually wasn't a big deal.

As part of my job doing astronomy outreach, I was leading a group of girls on a tour of our department and we were talking about how just a couple of days before - for the first time ever - when the commanders of the space shuttle and the International Space Station greeted each other after docking, it was two women shaking hands and hugging. And one of the girls, probably about 12 years old, said "It will be great when that doesn't have to be big news", or something close to that. I could have hugged her! Not only was she right, but if more girls her age have that attitude it won't be a big deal someday.

By the way, some of the bonus prize that some of the various winners (there are actually around a thousand prizes given out) get are a trip to the Nobel Prize ceremonies and naming rights for asteroids. How cool is that?!

Here's a round-up from Science News
at May 18, 2008 No comments:
Email ThisBlogThis!Share to TwitterShare to FacebookShare to Pinterest
Labels: Science Education

Because I really need another blog about as much as I need an extra hole in my head (or any other body part for that matter).

I know it is mostly friends and family reading this blog, but if you guys are interested, I've started a new Science and Skepticism blog called Sweet Yummy Reality. I'm not entirely sure how I came up with the name. I was kind of aiming for something to combat the image of "cold, hard science" I think, but there you have it. I have copied the science-related posts from this blog over there to stock it with something, although I just posted a new one and have a few others in the works. I'll probably mostly stick to the "science" part of the blog description, but given that I'm the person who gets all the UFO and 2012 end-of-the-world questions at work, there is bound to be some of the "skepticism" part too.

[Updated January 2012 - I've decided to close the blog mentioned above and move the posts over here to this one.]
at May 17, 2008 2 comments:
Email ThisBlogThis!Share to TwitterShare to FacebookShare to Pinterest 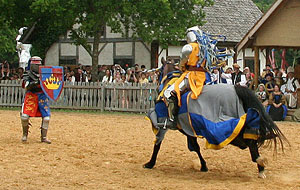 After what I think was a 10-year absence, I finally went back to the Scarborough Renaissance Festival up near Dallas. I had forgotten how delightful this faire is! It's smaller (although expanded since the last time I visited) than the big Texas Renaissance Festival near Houston and has kept a less-commercial feel. Part of the charm is the creek and wooded area that runs through the middle of the faire, as well as the big leafy trees (as opposed to the pine trees at RenFest). 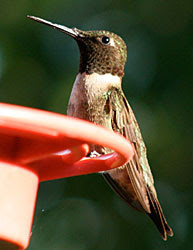 I've updated my Flickr bird set with some new hummingbird photos, as well as some of a male cardinal, a house sparrow and a white-crowned sparrow. Click on the hummer above to go to the set (the new photos are at the bottom of the set).
at May 09, 2008 No comments:
Email ThisBlogThis!Share to TwitterShare to FacebookShare to Pinterest 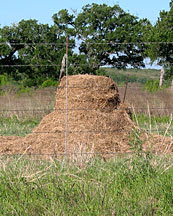 If you don't get the reference... here's a hint. And here is another.

I know, it isn't mashed potatoes, but I still thought it was funny. And yes, it is actually a hay bale that has been munched down by some cows.
at May 09, 2008 No comments:
Email ThisBlogThis!Share to TwitterShare to FacebookShare to Pinterest
Newer Posts Older Posts Home
Subscribe to: Posts (Atom)