We went to TRF this past weekend and had a great time as always. The pictures above go to this year's photos set on Flickr.
at November 06, 2007 No comments:
Email ThisBlogThis!Share to TwitterShare to FacebookShare to Pinterest 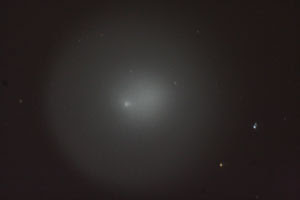 I have been meaning to post something about this very interesting comet for a week now... better late than never, I guess.

The comet, which usually hangs out in an orbit between Mars and Jupiter, had already made its closest pass by the sun (which wasn't all that close) and was heading back out, orbiting happily along at 17th magnitude. For those of you unfamiliar with the astronomical magnitude scale - that's VERY faint (about 24,000 times fainter than what you can see with the unaided eye). Then, on the night of October 23rd, it suddenly got bright. VERY bright. Over all, it ended up increasing about a million times in brightness in a day or two, probably from an outgassing event.

I was running the regular open house on one of the campus telescopes last Wednesday and decided to give the comet a look at the end of the night. I really had no idea what to expect, especially from the middle of Austin, with a nearly full moon, a large football stadium with all of its lights on and more sports fields about 20 blocks away (which always color the northern sky a bright yellow-orange when viewed from our building). I punched in the coordinates and moved the telescope over and climbed up to look in the eyepiece. I saw a bright, fuzzy blob in there and figured I needed to refocus the telescope with the new eyepiece I had slipped in. But, when I looked around the field a little, I realized there was a nicely-focussed star in the corner of the field, meaning the bright fuzzy blob was the comet! I was totally, amazed since I had never seen anything quite like it before. I wasn't very familiar with the constellation of Perseus, so I didn't realize until someone pointed it out that there was an extra "star" in it, clearly visible to the naked eye even in the middle of Austin.

I have been looking at it almost every night since, mostly just with binoculars and my unaided eyes, and it has been changing quite a bit over the week since the outburst. It is now distinctly fuzzy to the naked eye and disc-like in binoculars. The outer shell of gas has been expanding, so it has appeared to grow dimmer but it is now much larger.

I decided to try to photograph the comet last night with the telescope and the digital camera from the office and got a couple of decent photos (including the one up top). You can see both of the photos here. And you can see lots of other photos on SpaceWeather.com. Be sure to look at the finder charts and to go out and have a look yourself!
at November 01, 2007 No comments:
Email ThisBlogThis!Share to TwitterShare to FacebookShare to Pinterest
Newer Posts Older Posts Home
Subscribe to: Posts (Atom)