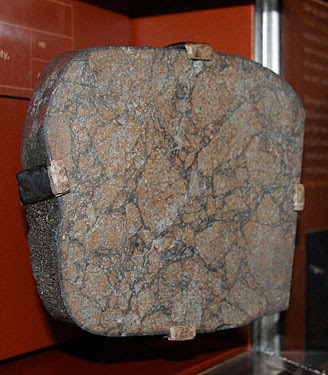 This is a fragment of one of the more famous meteorites to fall to earth. It is well-known for two reasons - first, it was caught on video (since it conveniently entered our atmosphere during high school football games!) and second, because it hit a woman's car.
at July 29, 2009 No comments:
Email ThisBlogThis!Share to TwitterShare to FacebookShare to Pinterest
Labels: Picture of the Week

I *knew* this weather was driving me crazy

I had a conversation with a few people a couple of weeks ago and I hypothesized that the endless heat and lack of clouds was causing a form of the seasonal affective disorder (SAD) that usually is associated with cold northern climates in winter. Well... this article came through Twitter from the Austin American Statesman today:

Meltdown! If you think the heat is making you crazy, you're probably right
By Helen Anders
AMERICAN-STATESMAN STAFF

A University of Arizona study found that the hotter it is, the more likely you are to honk your car horn at somebody (and, one must assume, the more likely that person is to return a salute of his or her own.)

And a University of Michigan study concluded that the hotter it is, the more Major League Baseball batters get hit by pitches.

We don't need a study to tell us that heat prompts us to make excuses for practically everything. "It's too hot," we say, to work out, cook, walk the dog, join a friend for lunch, shop ... you name it.

The National Alliance on Mental Illness calls the syndrome seasonal affective disorder, whose acronym is the highly apt SAD. Most cases happen in winter, but the alliance says 10 percent happen in the summer. People get depressed, can't sleep, don't want to eat and get all agitated.

Full article
at July 28, 2009 No comments:
Email ThisBlogThis!Share to TwitterShare to FacebookShare to Pinterest 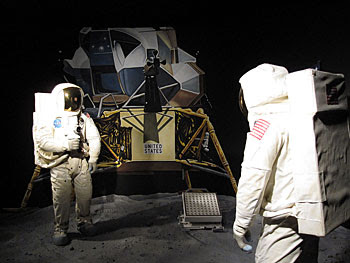 Model of moon landing at the "To The Moon" exhibition at the LBJ Library. April 2009.
at July 22, 2009 No comments:
Email ThisBlogThis!Share to TwitterShare to FacebookShare to Pinterest
Labels: Picture of the Week 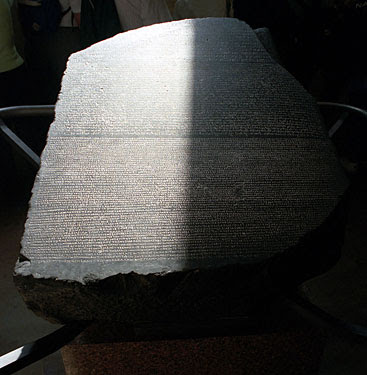 The Rosetta Stone. British Museum, May 1998.

This week is the 210th anniversary of the discovery of the Rosetta Stone in Egypt. When you visit the British Museum now, the stone is in an upright glass case, which is nice because you can see all of the stone now. But of course, you can't surreptitiously touch it any more. ;)
at July 16, 2009 No comments:
Email ThisBlogThis!Share to TwitterShare to FacebookShare to Pinterest
Labels: Picture of the Week 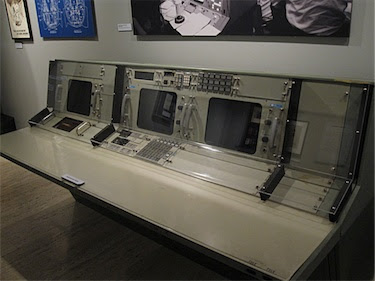 Section of a mission control console from the Apollo era at the “To the Moon” exhibition at the LBJ Library. April 2009.
at July 08, 2009 No comments:
Email ThisBlogThis!Share to TwitterShare to FacebookShare to Pinterest
Labels: Picture of the Week 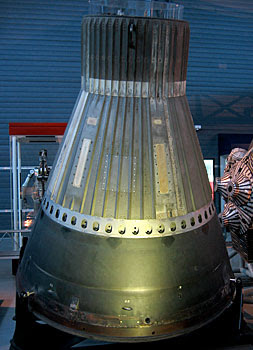 From the information plaque:

On September 9, 1959, NASA launched this unmanned Mercury spacecraft from Cape Canaveral, Florida, on a suborbital flight that lasted 13 minutes. It was the second Mercury launch and the first using an Atlas booster. The flight helped NASA evaluate the booster, the new ablative heat shield (designed to burn away during reentry to dissipate heat), the capsule's flight dynamics and aerodynamic shape, and spacecraft recovery systems and procedures.

The heavily instrumented "Big Joe" was the most massive American spacecraft launched up to that time. Its internal design was different from the manned version, but its success paved the way for the beginning of manned Mercury launches in 1961.
at July 01, 2009 No comments:
Email ThisBlogThis!Share to TwitterShare to FacebookShare to Pinterest
Labels: Picture of the Week
Newer Posts Older Posts Home
Subscribe to: Posts (Atom)