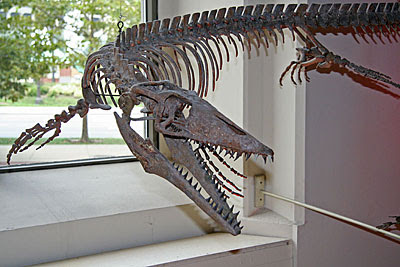 The Academy of Natural Sciences in Philadelphia. August 2006.

Unfortunately I forgot to take a photo of the ID plaque with this critter, so I'm not sure what species it is. I think (based on what I could get from the museum's website) that this is a juvenile Plioplatecarpus.
at May 27, 2009 No comments:
Email ThisBlogThis!Share to TwitterShare to FacebookShare to Pinterest
Labels: Picture of the Week

First, two shots from "Cosmos" showing how my main interests in life - Astronomy/Science and Tudor History - can sometimes combine in interesting ways. 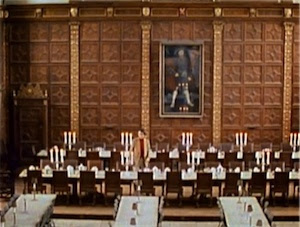 In this episode, Sagan is in a hall in Cambridge and you can sometimes see the portraits on the wall behind him, including a giant one of Henry VIII (top) and one with Mary I (bottom). The episode would have been filmed sometime in the late 1970s, so I'm not sure if these portraits are in the same place now. The one of Mary I looks like the portrait done by Antonio Mor, which is now in the Prado in Spain, I believe. However, it is possible (or even probable) that this is a copy. The painting of Henry is one of many of that same style, so I'm not sure which particular one it may be.

There also appears to have been a Tudor thing going on at "The Simpsons" lately. They did a great send-up of Henry VIII a few years back, but in a recent episode, Homer decides to help Bart build a matchstick Westminster Abbey and has some weird dreams when he falls asleep trying to finish it. Because it was Westminster Abbey, Henry VII got a mention, even though Homer accidentally carves an effigy of Henry VI (and it really was Henry VI when they briefly showed it - I was impressed!), but I couldn't resist a screen shot of Homer on his tomb (I guess Elizabeth of York didn't make it into Homer's dream): 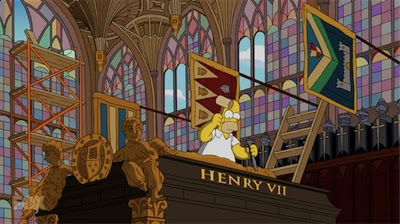 And Anne of Cleves (the only of Henry VIII's wives to be buried at the Abbey) and Chaucer float along to talk to Homer: 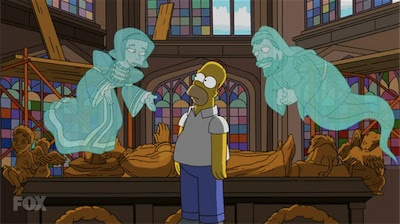 They could have gone with some better known Tudor-era figures - Mary I, Elizabeth I or Mary Queen of Scots, but instead we get mentions of Henry VII, an image of Henry VI and a talking Anne of Cleves. Interesting!

There was also some Elizabeth I and Sir Walter Raleigh stuff in another episode this season, so I'll have to grab some screen caps from that as well.
at May 25, 2009 3 comments:
Email ThisBlogThis!Share to TwitterShare to FacebookShare to Pinterest 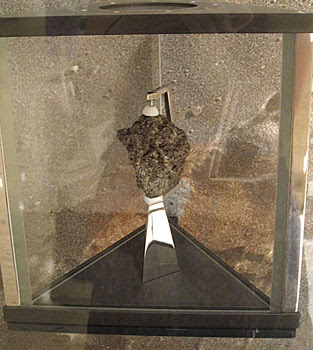 Moon rock at the LBJ Presidential Library
at May 20, 2009 No comments:
Email ThisBlogThis!Share to TwitterShare to FacebookShare to Pinterest
Labels: Picture of the Week 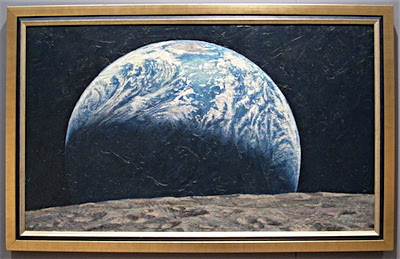 "Earthrise" painting by astronaut Alan Bean at the “To the Moon” exhibition at the LBJ Library. April 2009.
at May 13, 2009 No comments:
Email ThisBlogThis!Share to TwitterShare to FacebookShare to Pinterest
Labels: Picture of the Week 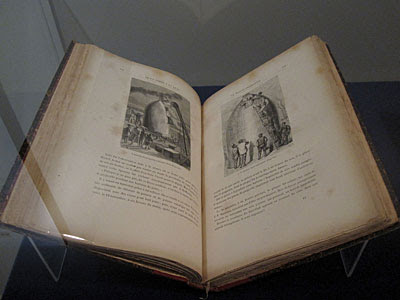 Jules Verne's "De la Terre a la Lune" ("From the Earth to the Moon") at the "To the Moon" exhibition at the LBJ Library. April 2009.
at May 06, 2009 No comments:
Email ThisBlogThis!Share to TwitterShare to FacebookShare to Pinterest
Labels: Picture of the Week
Newer Posts Older Posts Home
Subscribe to: Posts (Atom)