Photos from the Air and Space Museums now up 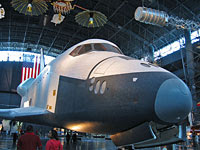 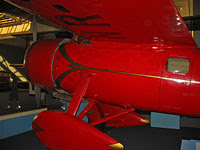 
The new Air and Space out at Dulles was absolutely wonderful for a space junkie like me. I also loved some of the old aircraft, especially the early Pan Am commercial airplane. Seeing the Enola Gay in one piece was neat too, since only half of it was in the American History Museum (I think...) 10 years ago, and the other have was getting restored at the Paul Garber facility. So, I have seen both halves separately and together now. Getting to see a space shuttle up close was pretty awesome too!

I had been to the downtown Air & Space nearly 10 years ago, but it was nice to get back there too. They had a new exhibit of the Wright Flyer and they have added the SpaceShip One - the first privately funded ship to go into space. I was also happy to get some better pictures of Amelia Earhart's Lockheed Vega, since the photos I took last time didn't come out very good and I was quite disappointed. I took lots and lots of photos, but I just chose a few to put up on Flickr since the world only needs so many photos of an SR-71...
at October 20, 2006
Email ThisBlogThis!Share to TwitterShare to FacebookShare to Pinterest
Labels: Astronomy and Space, Museums, Photography, Travel