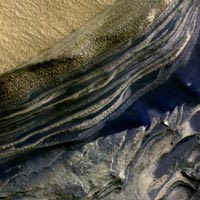 You know, since I'm in astronomy for a living and there are all kinds of amazing images and discoveries coming in everyday, you'd think I would have been blogging about astronomy more. And since I love science in general, you'd think I'd be blogging about all science more too! Well, hopefully this post will be the first of many more to come of things that catch my eye.

Mars is currently being studied by five spacecraft, and until recently it was six (since Mars Global Surveyor seems to have gone bye-bye), so there has been no shortage of incredible images and science coming from the Red Planet recently. Of course, there was the water announcement last week, for starters. Then there are the rovers Spirit and Opportunity that keep on roving and sending back amazing pictures. And the Mars Reconnaissance Orbiter which has the highest resolution camera ever to photograph Mars onboard. Mars Odyssey is the fifth spacecraft for those keeping count.

The picture up top is the latest release from the Reconnaissance Orbiter. In addition to the incredible details and the interesting science from the image, it's just plain pretty to look at.
at December 13, 2006
Email ThisBlogThis!Share to TwitterShare to FacebookShare to Pinterest
Labels: Astronomy and Space, Science