A big THANK YOU to the editors of Skeptical Inquirer

When the Jan/Feb 2009 Skeptical Inquirer arrived, I was thrilled to see that the topic of the issue was "The New UFO Interest - Scientific Appraisals". Why was I so thrilled? Because I'm the person at work who most often has to field the "I think I saw a UFO" calls, or inquiries from the press when a big UFO story breaks (especially if it is in Texas). The article on "The Stephenville Lights" was particularly helpful since that one still gets brought up at public viewing events or field trips. It was also of particular interest to me since my father is from a near-by town (which also happens to be in a probable impact crater -- the real science of the area is so much more interesting than some misunderstood lights in the sky!). So, again, THANK YOU!

As I'm sure happens to many people in astronomy, I often get asked if I "believe in UFOs". Of course, that's a tough question to answer directly, so I always break it down into what they are literally asking and what they probably actually want to know. Do I believe there are lights in the sky that are unidentified by the average person? You bet. Do I believe they are visiting alien spacecraft? Nope - at least not with the evidence currently on hand. And the other assumed question about whether or not there is life elsewhere in the universe? Almost certainly. I'm just pretty sure that those alien life forms aren't visiting earth to kidnap and mutilate our cows. 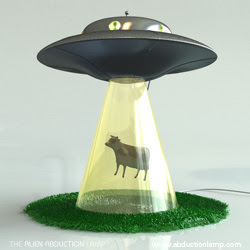 Edited to add:
About 12 hours after I posted this, Rebecca at Skepchick tweeted about this: California Store Sells Beef Jerky Reclaimed from Cows Mutilated by Aliens
at January 11, 2009
Email ThisBlogThis!Share to TwitterShare to FacebookShare to Pinterest
Labels: Skepticism