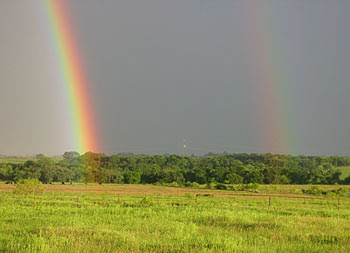 This photo is from a storm that blew through one evening about two weeks ago. It rained pretty hard, but it also cleared really fast. With the sun fairly low in the west and it still raining off to the east I was pretty sure we'd have some nice rainbows and I wasn't disappointed. I only wish I had the SLR with the really wide angle lens at home so I could have captured the whole arc! A secondary rainbow was also visible for a lot of the time, although it didn't make a whole arc.

One cool thing is that the rain hadn't moved too far when the rainbow started to show up, so it appeared to be coming down in our neighbor's field. Guess I should have gone looking for that pot of gold, but I think the cows beat me to it. In the picture above (which is linked to my rainbow Flickr photoset -- the last six are from this storm) you can see the rainbow coming down in front of the cows and the trees on hill in the background.
at April 27, 2007
Email ThisBlogThis!Share to TwitterShare to FacebookShare to Pinterest
Labels: Life, Photography, Weather

Wow, I wished I lived in the beautiful countryside! I'm stuck in the polluted suburbs. ;)