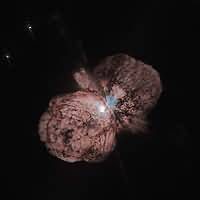 I've got to brag on a couple of colleagues who were mentioned in the New York Times today. From the article:

In a cascade of superlatives that belies the traditional cerebral reserve of their profession, astronomers reported today that they had seen the brightest and most powerful stellar explosion ever recorded.

... Astronomers have been following the star since last September, when it was discovered in a galaxy 240 million light years away in the constellation Perseus by Robert Quimby, a University of Texas graduate student, who was using a small robotic telescope at McDonald Observatory near Fort Davis, Tex., to troll for supernovas. [note: one addition... Robert is a Post-Doctoral Fellow now, and still at UT]

... “The core is still composed of explosive oxygen,” explained Craig Wheeler of the University of Texas and another of the paper’s authors. “The oxygen ignites and blows the star to smithereens with no remnant, no black hole left.” [another note: Craig is also the current president of the American Astronomical Society]

The star up at the top of the page is Eta Carinae, which is mentioned in the article. It similar to the star that exploded, but much closer to home. If you click on the image it will take you to the press release from Hubble.
at May 08, 2007
Email ThisBlogThis!Share to TwitterShare to FacebookShare to Pinterest
Labels: Astronomy and Space, Science