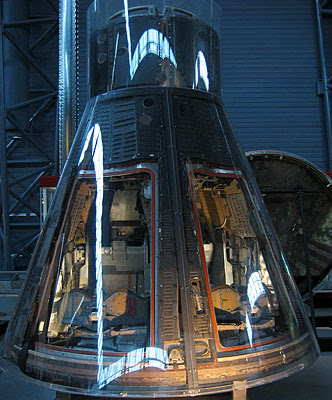 From the information plaque:
Frank Borman and James A. Lovell Jr. lifted off aboard Gemini VII on December 4, 1965. Their primary mission was to show that humans could live in weightlessness for 14 days, an endurance record that stood until 1970. Their spacecraft also served as the target vehicle for Gemini VI-A, piloted by Walter M. Schirra Jr. and Thomas P. Stafford, who carried out the world's first space rendezvous on December 15. These two achievements were critical steps on the road to the Moon.
at March 11, 2009
Email ThisBlogThis!Share to TwitterShare to FacebookShare to Pinterest
Labels: Picture of the Week