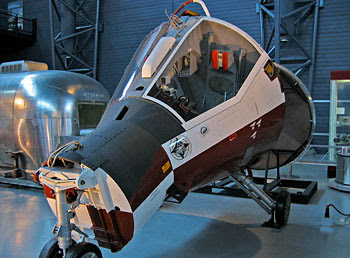 From the information plaque:
At the start of the Gemini program in 1961, NASA considered having the two-astronaut Gemini capsule land on a runway after its return from space, rather than parachute into the ocean. The controlled descent and landing was to be accomplished by deploying an inflatable paraglider wing. However, NASA later decided to stick with the proven technology of parachutes and water landings.

This full-scale, piloted Test Tow Vehicle (TTV) was built to train Gemini astronauts for flight. It served as the first of two TTVs used to perfect maneuvering, control, and landing techniques. A helicopter released the TTV, with its wing deployed, over the dry lake bed at Edwards Air Force Base, California, where it landed.
at April 18, 2010
Email ThisBlogThis!Share to TwitterShare to FacebookShare to Pinterest
Labels: Picture of the Week