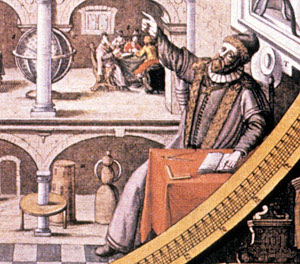 This is another one of those stories that comes along every so often that allows me to geek out from both the history and science perspective (and in this case, my actual career science field - astronomy!). Tycho is one of those interesting characters of science that seems to cause endless fascination, so I'm not surprised to see this. And yes, he's the one who famously had a metal replacement nose after losing the flesh one in a duel!

Tycho Brahe was a Danish nobleman who served as royal mathematician to the Bohemian Emperor Rudolf II.

He was thought to have died of a bladder infection, but a previous exhumation found traces of mercury in his hair.

A team of Danish and Czech scientists hope to solve the mystery by analysing bone, hair and clothing samples.

Tycho was born Tyge Ottesen Brahe in 1546 in Scania, which at the time was a Danish province, and studied astronomy at the University of Copenhagen, as well as German academic institutions.

He catalogued more than 1,000 new stars and his stellar and planetary observations helped lay the foundations of early modern astronomy.
...

Professor Jens Vellev, from Aarhus University, is leading the team of scientists and archaeologists which opened the tomb in Tyn Church on Monday.

He says he hopes to get better samples of hair and bones than were taken in 1901.

The use of the latest technology to test the samples may also help shed more light on the mystery of the astronomer's death, although Professor Vellev is not promising anything.

"Perhaps, we will be able to come close to an answer, but I don't think we will get a final answer to that question," he said.

The scientists also hope to determine what kind of metal Brahe's prosthesis was made of - it was commonly believed to have been gold and silver, but others suggested it might have contained copper.

And finally, a bunch of photos and some video from the research are available on the Opening of Tycho Brahe's Tomb pages from Aarhus University
at November 17, 2010
Email ThisBlogThis!Share to TwitterShare to FacebookShare to Pinterest
Labels: Astronomy and Space, People in Science and Skepticism