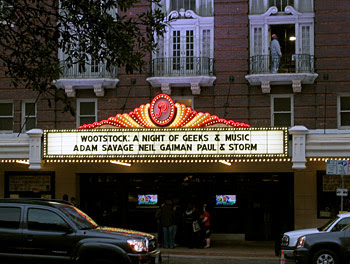 I first caught wind of the awesomeness that is W00tstock through following Wil Wheaton and Adam Savage on Twitter (@wilw and @donttrythis) and kept hoping they would find their way to Austin eventually. I would say that Austin can hold its own as a very geeky city and was deserving of this celebration of all things geek. It took a year, but they finally made it! I was disappointed that Wil couldn't be here (he's been filming The Big Bang Theory and Eureka - and since I love those shows, I forgive him), but boy did Austin hit the jackpot with our guest 'Wil Wheaton' - we had Neil Gaiman! Although I still haven't read the Sandman comics, I've been a fan of Neil Gaiman's for a while now. I've listened to several of his works on audiobooks, including several that he has read himself. Having an author read their own works is sometimes hit-or-miss, but Neil Gaiman is a wonderful reader so getting to hear him read a couple of short stories live was a real treat!

I also got a picture of him wearing a monkey hat. Yeah, a monkey hat (you had to be there to really understand...): 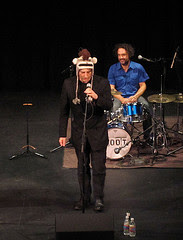 (click for a larger version and to see the amazing number of views the photo has had since Neil retweeted me when I posted it to Twitter - major fangirl geek out moment!!)

And a short video of Neil giving an unenthusiastic pirate "Arr" with the monkey hat on - again, you had to be there to understand (including why he was pretending to be very put out to have to wear the hat and say "Arr"):

And here's my full set of photos on Flickr

Needless to say, I had a wonderful time and I'm pretty sure I haven't laughed that hard and that long for quite a while! And it was sure a much better way to spend election night than sitting at home hearing the results come in.
at November 07, 2010
Email ThisBlogThis!Share to TwitterShare to FacebookShare to Pinterest
Labels: Random Geekiness