On September 20, the Space Shuttle Endeavour did a fly-over of Austin and I caught a really cool photo of it with the UT Tower. You can see my original blog post about it here. 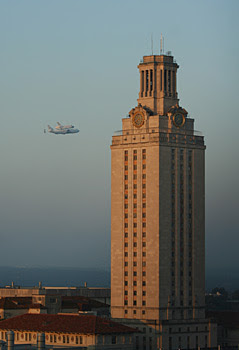 The weird thing was that for the next few months, after the initial rush of the first few days, I still saw a trickle of retweets, views, and comments.

Then, I got a tweet from someone at Twitter saying that they would like to use the tweet/photo as part of an official Twitter project. I was intrigued, but figured it would show up somewhere buried in a 2012 wrap-up. Well, I was partially correct, it was in a 2012 wrap-up, but buried it certainly wasn't! Imagine my surprise when it showed up here: 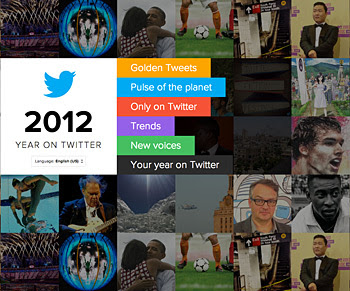 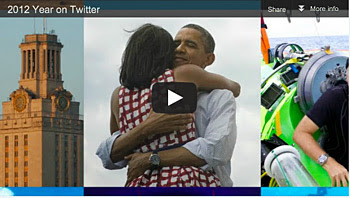 And in the video itself: 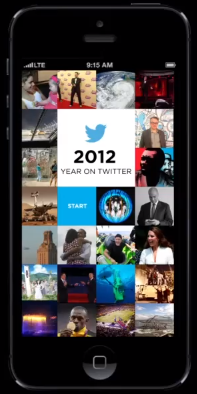 (Below the Curiosity rover and next to Barack and Michelle Obama. Seriously?!?!)

And here's the whole video:

And one of the more amusing places that the photo and tweet showed up was this blog entry from the TexasExes: UT Tower Lands on Twitter’s Most Popular Posts of 2012


Compared to Barack Obama's most re-tweeted tweet ever, my little photo and tweet of the Space Shuttle Endeavour was nothing. But to an average person like me it was a big deal!

The stats as of today, the last day of 2012, are: on Flickr - over 5500 views, 100+ favorites and 39 comments. The actual tweet directly from my account was retweeted about 800 times, but I also sent it to several local news outlets and *their* tweets also got a lot of traffic so the twitpic is edging towards 35,000 views! There were also several shares and about 800 likes on Facebook (I think, it's hard to track stuff like that on Facebook) and there were shares on Google+ and on blogs. I did a search on the link to the Twitpic (http://twitpic.com/awk6ky) and saw all sorts of links that I didn't even know about before! And I've gained about 150 followers in the past few weeks - I'm sure most of them are people hunting for follow-backs or are spambots, but still, it's kind of cool. :)

I did post a couple more pictures of the fly-over, although they weren't as special as the Tower shot, I did like this one of it coming in: 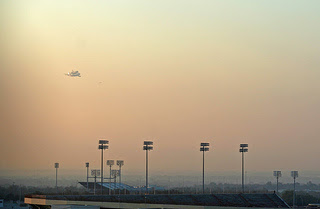 While I doubt 2013 will bring anything like this, I'm still excited to see what happens in the new year!
at December 31, 2012
Email ThisBlogThis!Share to TwitterShare to FacebookShare to Pinterest
Labels: Astronomy and Space, Life, Photography, Science