The Face of Copernicus 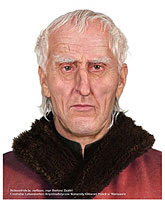 [This was the post I was working on when the blog went belly-up!]

I love it when astronomy, archaeology, forensics and history come together!

Researchers in Poland say they have solved a centuries-old mystery and identified the remains of astronomer Nicolaus Copernicus.

A comparison of DNA from a skeleton in Poland and strands of the astronomer's hair found in a book in Sweden almost certainly confirm it is his skeleton.

Archaeologists found the skeleton in north-eastern Poland three years ago in a cathedral where Copernicus lived.
...
Three years ago, archaeologists dug up a skull and partial remains of a man aged about 70, Copernicus' age when he died, near an altar at the cathedral.

Jerzy Gassowski, the leader of the archaeologists' team, said forensic facial reconstruction of the skull found that it bore a striking resemblance to existing portraits of the father of modern astronomy.

Scientists then matched the DNA from one of the skull's teeth and a femur bone with two strands of Copernicus' hair.

Article from The Guardian

Post from 2005 about the initial discovery
at December 04, 2008
Email ThisBlogThis!Share to TwitterShare to FacebookShare to Pinterest
Labels: Astronomy and Space, History, Science