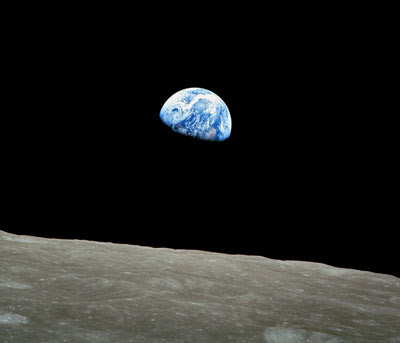 Earthrise, by the crew of Apollo 8, December 24, 1968. As many other blogs have noted, including today's entry on Astronomy Picture of the Day, this is the 40th anniversary of the Earthrise photo. This page from ABC (the Australian one) tells the story of the famous photograph.

I have always known a world where the Earth has been seen from space, but this photo never fails to move me. I can only imagine what it must have been like for people all over the world seeing it for the first time 40 years ago. Even when the Earth is only a dot seen from the outer reaches of the solar system (like in the photo I use for my blog banner), it's still home. And although it was written in 1942, long before we explored the solar system, T.S. Eliot said it best:

We shall not cease from exploration
And the end of all our exploring
Will be to arrive where we started
And know the place for the first time.
at December 24, 2008
Email ThisBlogThis!Share to TwitterShare to FacebookShare to Pinterest
Labels: Picture of the Week