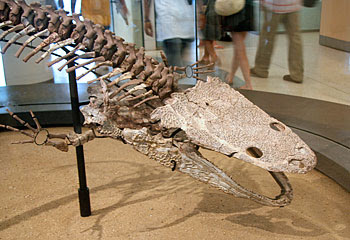 From the information plaque:

One of the large temnospondyls that lived in the Triassic of North America was Buettneria. This animal, with its large toothed skull and small limbs, may have been a lurking aquatic predator, similar to modern crocodiles. Buettneria must have been successful, because its fossils and those of its close relatives are found throughout North America, Europe, Africa and Asia. This skeleton is a composite (made up of more than one individual), and is one of the few actual skeletons of Buettneria mounted for display.

Buettneria Lived about 225 million years ago
at September 09, 2009
Email ThisBlogThis!Share to TwitterShare to FacebookShare to Pinterest
Labels: Picture of the Week