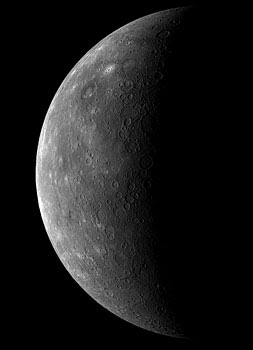 Mercury as imaged by the MESSENGER spacecraft during its fly-by yesterday.

More information on this image

I was following the fly-by on Twitter yesterday, but I missed some of the drama of the spacecraft going into safe mode until I got home from work. It turns out that some of the data was lost, but the ultimate goal of the fly-by was a gravity assist, which worked fine. The spacecraft will actually go in to orbit in March 2011, but during the three Messenger fly-bys we've already seen parts of Mercury that have never been imaged up-close before. Only about 40% of Mercury was imaged by the Mariner 10 spacecraft in 1974 and 75, so there is still a lot to learn about this little planet!
at September 30, 2009
Email ThisBlogThis!Share to TwitterShare to FacebookShare to Pinterest
Labels: Astronomy and Space, Picture of the Week, Science