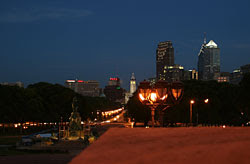 Friday was a slow start after the traveling and heat of the previous days. We got a late start out of the house, so we ended up not getting to go into Independence Hall or to see the Liberty Bell. Yes, I managed to get to Philadelphia for several days and not see the Liberty Bell. Something to save for a future trip. We did walk around society hill, which has some wonderful colonial/revolution era buildings. We saw a very interesting group of re-enactors, including a lady spinning wool. Going to have to try that myself someday.

Part of the reason we didn’t hang around for the open time at Independence Hall was that we were going to dinner and music at the Philadelphia Museum of Art. Dinner was nice and the music was great – a group called Scythian, who have a fusion of Celtic, Klezmer, Gypsy, and rock. Good stuff. We also wandered around the museum for a few hours. They have a very nice collection, and of course a Thomas Eakins gallery. One of the things I loved about Philly is it is the one city in the nation where almost everyone knows how to pronounce my last name.

After the music we went out to the east entrance (overlooking Eakins Oval!) and watched several people run up the steps and re-enact the famous scene from Rocky. From there we went up to Chestnut Hill for desert, which was yummy and a great way to round off the day.
at August 04, 2006
Email ThisBlogThis!Share to TwitterShare to FacebookShare to Pinterest
Labels: History, Life, Museums, Travel