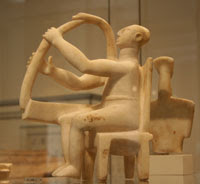 First off, why did we have to pick the three hottest days of the year to visit New York? And why isn’t the subway air-conditioned? Okay, I understand the reasons behind the second, but I think the first one is just my own bad luck. I’m pretty sure that entering into the subways was akin to walking into the mouth of Hades itself.

Other than constantly being hot and sticky, I did have a great time in New York.

We arrived from Philly at about noon, after taking the train up through New Jersey. We went to the hotel (The New Yorker) to see if we could dump our bags before check-in but were delighted to find that our room was ready and we could go ahead and go up. We dumped the stuff and headed up to the Metropolitan Museum of Art. The Met recently increased their “suggested” admission to $20, although we only paid $5 each. If I had more money to spend, I would have because I think it’s a good cause.

The Met was incredible, even though I don’t think we managed to see even half of what they have on display. When we first went in and started into the galleries, the first thing that caught my eye were Cycladic figures, which I learned about courtesy of my Art History class last fall. They are very “modern” looking and therefore popular, sometimes faked and collected as the result of tomb robbing. Several of the pieces at the Met were objects that we had studied in class, and it was amazing to be looking at them in person (even behind glass). Since the Met allows non-flash photography, I took some photos, some of which came out decently. (see above)

We went further into the Greek galleries and then wandered into some late and modern European art, including Picasso and Dali. Then we saw some Degas ballerinas, Seurat Pointillism, Monet water lillies and Van Gogh.

We briefly went into the Ancient Near East galleries and I attempted to get some photos of the Assyrian Lamassu, which didn’t come out too well. Too bad, since those are some of my favorite figures from the era. Then we walked through the Musical Instruments, which of course included some Stradivarius violins and a cello. I was hoping they had some shawms, a medieval forerunner of an oboe, and they did. They also have some really neat clarinets.

We also went through the Renaissance art and I found a few Holbeins. Next we went over to the American art to find Washington Crossing the Delaware. I had no idea the painting was so huge! We also found a couple of Thomas Eakins paintings in that area.

Unfortunately we hit the Egyptian galleries late in the day and only saw a fraction. Although we did see perhaps their biggest piece, a reconstructed temple. At that point we had hoped to try to get back for a few hours on one of our other days, but unfortunately it didn’t happen. Well, something to look forward to seeing next time.

The one big complaint about the Met is that there isn’t a very close subway stop. No matter where you get off, you end up having to walk a fair amount. I’m sure in the spring and autumn, that’s fine, but in 100+ degrees (F), it was a chore. We walked across Central Park to catch the subway on the other side, which went right back to the hotel. On the way across the Park, we saw Cleopatra’s Needle, which is suffering greatly from being in the city and exposed to acid rain. We also went up to Belvedere and I got a nice view of the Park.

We ended up at T.G.I. Friday’s for dinner, where we had a thoroughly disinterested waiter and sticker shock from the prices. After dinner we went back and crashed at the hotel after a long, hot day in the city.
at August 01, 2006
Email ThisBlogThis!Share to TwitterShare to FacebookShare to Pinterest
Labels: History, Life, Museums, Travel