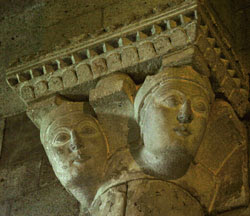 In which we drive in seven states, go medieval, and see a baby black bear.

Saturday was a long day, but actually quite fun. We left Philly at about 8 a.m. and started on our way to Maine. Since the drive up included going right by The Cloisters on the north end of Manhattan, we decided to stop off and see them on the way. It was something I had thought about doing when we were in New York, until we realized that the drive to Maine would include going over the George Washington bridge, which is right next to The Cloisters. After paying several hefty tolls, we got there right as they opened (which was perfect), so we almost had the place to ourselves for the first half hour or so. Part of the reason that I wanted to go there was a fairly famous corbel from 12th century France that has two figures once thought to be Henry II and Eleanor of Aquitaine. It is the figure in the opening credits of The Lion in Winter (1960s version) and I love that movie. So I did indeed get to see it (see above) and many other neat pieces of medieval art and architectures. The whole building is fabulous. Now that I have experience in real medieval buildings, I can appreciate what a great job they’ve done there are capturing some of the atmosphere.

After The Cloisters we continued up through New York, Connecticut, Massachusetts, New Hampshire, and finally arrived in Maine (after having started out in Pennsylvania and driving through New Jersey). We stopped at the Brunswick Dunkin Donuts for the third time in as many years, so now I feel it qualifies as a tradition.

As we were about to cross the bridge onto the island, the cars ahead of us were all slowing down and breaking and we saw what looked like a big dog lumbering down the middle of the road. When we got a little closer, we soon realized that it was a baby black bear, the first we’ve seen in the area. No sign of Momma Bear, who was probably ahead of baby in the woods on the other side of the road.

We reached Deer Isle at about 8:30 and crashed fairly early. It’s great to be back!
at August 05, 2006
Email ThisBlogThis!Share to TwitterShare to FacebookShare to Pinterest
Labels: History, Life, Museums, Travel