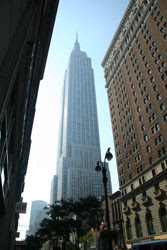 Since Thursday was our last day in NY and we were only three blocks from the Empire State Building, we decided to start the morning off there. It turned out to be a good thing to do it early in the morning since it hadn’t gotten too hot yet and there wasn’t much in the way of crowds. It was $16 to go to the 82nd floor observatory. It would have been $30 total to go all the way to the 102nd floor so we passed on that. It was actually rather amazing how shameless they were in trying to get money out of you there. They tried to get you to get the upgrades and the audio guides and had everyone stop in front of a green screen to have a photo made (and then handed you a ticket to claim the photo if you wished to purchase it as you were leaving). It was also an interesting way to get a photo of everyone going up to the deck…

The view was amazing, although very hazy. It was hard to see the Statue of Liberty, which wasn’t all that far away. I did get a neat shot of the hotel though (which turns out to have an interesting history of its own).

From there we went to the Natural History Museum. It was quite crowded with summer camp groups of kids, plus lots of families. One interesting thing about taking the subway up there was that it really drops you off AT the museum. That was actually quit nice, since it meant little exposure to the heat.

We opted for the extra admission to see the Darwin exhibit, bringing it to $21. A little steep, but we did end up spending several hours there. The Darwin exhibit was pretty neat and included some of his original diaries and specimens collected on the Beagle. Near the end they had an interesting display of a high school biology textbook and the short-lived Cobb County Georgia “warning” stickers. Basically the whole exhibit was a testament to evolution and how it is the underpinning of our knowledge of life on earth. In a way, almost the whole museum reinforces that through the fossils and phylogenic trees on the info cards on many animal specimens throughout the museum. Good on them! One small disappointment is that they are redoing the 77th street entrance, so we didn’t get to see that, or the human evolution wing which is also being re-done. If we had had more time and money, it would have been fun to do the IMAX and Planetarium, but perhaps another time.

We finished up at the museum, retrieved our stuff from the hotel and started the train rides back to Philly. Dinner was a nice local pizza up in the area where we were staying with family.
at August 03, 2006
Email ThisBlogThis!Share to TwitterShare to FacebookShare to Pinterest