This was the first full day of the meeting after the previous night's opening reception (which I decided not to attend). I skipped the 8:00 a.m. welcoming address and 8:30 a.m. invited session this day in favor of a few extra minutes of sleep.

My first volunteer session was on "Exciting Astrophysics: Supernovae, Relativistic Astrophysics, and Other Results I" and it was my first introduction to the system they have devised for getting the talks into all of the rooms from the central "speaker ready room". The idea is to have all of the speakers pre-load their talks in one central location and they are then piped to the appropriate room that is already set up with a laptop and projector (I was pleased to see all of the machines were Macs - both in the ready room and meeting rooms!) There were a few hiccups in that first session, but the a/v staff were able to get it ironed out before we were scheduled to start. Having run the a/v for MANY astronomy meetings, I was impressed by the set-up, which seemed to work really well (at least in all of the sessions I attended or worked).

After lunch I went to the James Webb Space Telescope town hall, which turned out to be as interesting as I expected, but not at all as contentious as I thought it might be given budget issues. One of the neat things mentioned in one of the talks was the live JWST construction webcam where you can see into the clean room. The final talk in the town hall was how the telescope could be used in the effort to detect and characterize the atmospheres of all of the planets we're finding around other stars. I'm still kind of amazed that we even have detected the planets, much less their atmospheres! 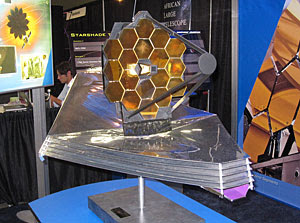 Model of the JWST in the Northrop Grumman booth

I worked a second volunteer session - "Exciting Astrophysics: Supernovae, Relativistic Astrophysics, and Other Results II" and I then went to the "Challenges and Achievements in 50 Years of Human Spaceflight" talk by retired NASA astronaut Steve Hawley. The talk was basically an overview of the US (and some of the Soviet/Russian) manned space program, with Hawley discussing some of his own flights. Hawley has a PhD in Astronomy and Astrophysics, so he is "one of us", but it was still nice to see the standing ovation from 1000+ astronomers for an astronaut who has literally risked his life for our field. 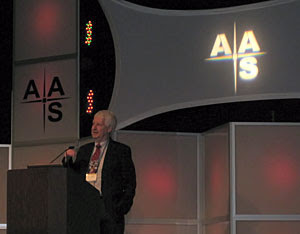 As a NASA astronaut, Hawley flew on a total of five space shuttle missions, including the deployment of the Hubble Space Telescope (STS-31), a servicing mission to Hubble (STS-82) and the deployment of the Chandra X-ray observatory (STS-93). STS-93 was Hawley's final flight and has the distinction of being the first shuttle commanded by a woman - Colonel Eileen Collins. Hawley showed this neat photo and pointed to the streak saying: "That's me!". I have my own photo of that re-entry, since it was visible over a large part of Texas. 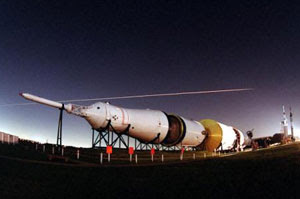 Probably one of my favorite things from Hawley's talk was that space sickness is "Space Adaptation Syndrome" in NASA speak. He also had some interesting comments about how much quicker things progressed in the early space program (Mercury, Gemini and Apollo) vs. now. Of course there is a lot more of an issue with getting and keeping funding then there was in the heady early days of manned space flight and the competition with the Russians.

After Steve Hawley's talk, the Historical Astronomy Division awarded the Doggett Prize to Woodruff T. Sullivan who presented a talk on "Cosmic Noise: The Pioneers of Early Radio Astronomy and Their Discoveries". I stayed for that talk but I was getting tired and decided not to attend the 8:00 p.m. public talk by Steven Weinberg on "Big Science in Crisis". I kind of wish I had, but I know that he is writing up the talk as an article for the New York Review of Books.
at January 28, 2012
Email ThisBlogThis!Share to TwitterShare to FacebookShare to Pinterest