I started off the day a little late (again) but had a chance to get a few photos of friends at posters before heading to my first session. 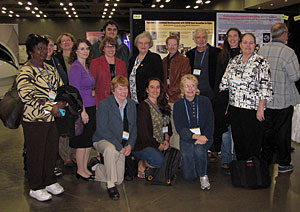 Drs. Mary Kay Hemenway and Chris Sneden and the SOFIA Teachers with their research poster.

I designed the poster above, so I had to get a photo of the authors with it!

The first session I worked was also one that I was interested in anyway - "Professional Ethics in Astronomy: An Ongoing Dialogue". One of the panelists was a professor at my university many years ago, but I'm pretty sure he didn't remember me. The discussion was very interesting and it makes me really glad that I don't have to deal with a lot of the issues that some of my colleagues do! I wish I had taken more detailed notes on the actual talks and resulting questions and conversations but my laptop battery was low. Anyone interested in the topic should check out the Sigma Xi ethics publications. Unfortunately the session that is probably most related to my own work - "Education, Outreach and Citizen Science" was at the same time so I wasn't able to attend.

The next talk I attended was the Annie Jump Cannon Prize lecture by this year's recipient, Rachel Mandelbaum. The Cannon Prize is awarded to a young woman PhD astronomer residing in North America. Looking over the list of previous winners I realized that I personally know several of them!

After a quick lunch and stroll through the posters, I worked a session on "Pulsars and Neutron Stars", which thankfully ended a little early so I could run over to catch the end of the "Working in Science Policy" panel. This is another one that I wish I could have attended, partly out of interest but also because one of the panelists was an old friend. I got a brief chance to say "hi" at the end of the panel, but moved aside so he could talk with people who were actually there to learn about jobs. :) While I was there I ran into another old friend that I had been meaning to catch up with and ended up sitting around and talking with her for the next few hours instead of attending more talks.

After catching up for a while we decided to go out for dinner at one of my favorites - Threadgill's (her choice since she's the one who doesn't get to Austin much, but there wasn't an argument from me!), along with her editor from Astronomy Magazine. We popped back over to the convention center after dinner and then I bailed on the UT Astronomy alumni party and the Saving Hubble film screening (which were both going on at the same time) and went home. I really don't have the stamina for these meetings that I did back in the 1990s!

One other thing from today, the NRAO announced that the VLA in New Mexico has been renamed the Karl G. Jansky Very Large Array in honor of the founder of radio astronomy. A very appropriate choice!
at January 29, 2012
Email ThisBlogThis!Share to TwitterShare to FacebookShare to Pinterest
Labels: Astronomy and Space, Science