As I was migrating everything back to this site from the science and skepticism one that I'm shutting down, I came across a few draft posts that I had never finished and published. This is one of a creation/evolution debate that I attended in April 2009. Thankfully I have notes that I typed up close to the event, so hopefully not too much is misremembered. 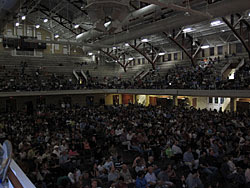 Well, my first live and in person creation debate, since I've watched them through the internet before. Unfortunately I didn't get around to typing up my notes until more than a month after the actual debate, so some of my recollections might be a little fuzzy now. Head over to Skeptiblog for Michael Shermer's write-up. (One small correction that I would make to Shermer's write-up is that the arena is primarily used for volleyball, not basketball... but that doesn't really have any relevance to the debate!)

My first reaction was to be a little surprised at the turnout. I know some people were organized church groups, as well as students who probably were there to get extra credit for a class. And I'm guessing there were some folks there from the CFI Austin. I also saw some of my co-workers from Astronomy (which wasn't too surprising). I was also delighted to see one of my former physics professors, Austin Gleeson, on the Q&A panel (at the far-left in the photo below). 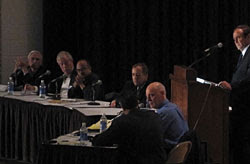 Another surprise was that the content of the debate actually had nothing to do with its advertised title of "Was Darwin Wrong" (I think... I can't be 100% positive now that that was the exact title, but I know it was something similar to that). The science and skepticism side was primarily represented by Michael Shermer from the Skeptics Society, and that was one of the main reasons I was there (I've been a member for a few years now). The other side though were two people from "Reasons to Believe" (shortened to "Reasons" from here on out), which I wasn't as familiar with. I was expecting someone from Answers in Genesis or Discovery Institute (at this point I should admit that I didn't look up the names from the poster beforehand to find out more about the non-evolution side of this debate). I was only familiar with the Reasons folks in passing, so I wasn't as up to speed with their "brand" of creationism/intelligent design (although they refute those labels for their organization).

Reasons's main approach seems to be to try to shoehorn science into the Bible, and vice-versa and that rather than arising through natural processes, God has driven the creation of the Universe, our solar system, life, and man. Unfortunately I don't have a whole lot of specific examples they gave, but see Shermer's post (and the other he linked to within his post) for how they go about it.

Interestingly, a lot of the things that were covered in the Rare Earth lecture that I attended a month before came up in this debate, but the Reasons group sees those factors as proof of divine guidance of creation. Of course, they basically have it completely backwards. They approach it as "life on Earth is the end product, so these factors must have been necessary" as opposed to, "these are the factors, what is the end product that could arise from those initial conditions?".

As I expected, the Reasons folks threw out a lot of claims, out-of-context quotes and outright fabrications that would have been impossible for Shermer to completely refute in the allotted time. I was actually kind of surprised that he didn't just come out and say "you're doing it backwards" - since really that's all he had to do. Reasons calculates that the odds against life on Earth forming are (at the time of this debate in 2009) 1 to 10^-556 due to the potential variables in nature (temperature that water freezes or boils, the gravitational constant, etc) so that must be proof that God has driven our creation. Well, no, we evolved under those conditions, but if there were slightly different conditions, who's to say that some other form of life wouldn't have arisen? (And I'm sure if they evolved into a life form with civilizations they would have individuals who were equally convinced of their special place in the Universe and that it was created especially so their form of life would arise.)

I don't have any notes from the panel part of the debate, but I recall that science was well represented by the UT folks (yeah, I'm probably totally biased about that!). 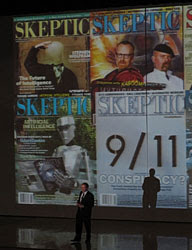 If I get a chance to attend another event like this, I'll take along a digital recorder so I can write-up a more comprehensive post, but I hope anyone who made it through this gets a feel for what the event was like.
at January 16, 2012
Email ThisBlogThis!Share to TwitterShare to FacebookShare to Pinterest
Labels: Evolution, Skepticism

The evolution theory is an irrational falsehood, zealously embraced by atheists, that is a phony conclusion of the 600+ million year fossil record. There is no “valid supporting data” for evolution. In a court of law, or in a public forum, the same evidence that evolutionists would use to try to “prove” the validity of that theory, I would utilize to reveal the truth of Genesis. In order to believe in evolution, you have to purposely ignore certain facts of reality. For example, when you see illustrations of primates being pictured as evolving into humans, it can be shown in a court of law that such a premise is impossible, because certain human and primate traits are different, and could not have ever been shared. The only “common ancestor” that humans and primates share is God Himself.

Current Creationism has refused to teach the truth of the Genesis text, and either teaches foolishness (young Earth), or false doctrines (non-literal reading of the text). Creationists thoughtlessly try to prove “Creationism”, rather than seeking and teaching the truth of Genesis. How can an untruth, ever prove another lie, to be in error? You can’t do it. That is why Creationism fails. It essentially is also a lie, and should be discarded, even by Bible believers.

The correct opposing view to evolution is the "Observations of Moses", which conveys the truth of Genesis chapter one.

Those that imply that God used evolution are infidels at worse, or clowns at best, that refuse to learn the truth of Genesis. The truth has been available for more than 18 years. Such a discussion is currently silly, and shows stubbornness against learning the truth of God's Word.

I think this may be the first time I've come across someone who thinks both scientists and creationists are wrong. Wow.