I went over to the Harry Ransom Center last week to see a small display of historical astronomy texts (more on that later) and finally also saw their larger exhibition Banned, Burned, Seized, and Censored shortly before it closed.

The exhibition focussed on the years between the world wars and the various organizations and methods that were employed to "to rid the country of offensive literature". I often find it hard to believe that things like this happened in our nation's history, but then I remember that during this same period, alcohol was banned by Constitutional amendment.

It seems that the rise of fascism, the outbreak of WWII and public Nazi book burnings took the wind out of the sails of organizations who had previously advocated doing the same thing in the United States. I loved this poster with a quote by President Roosevelt condemning book burning: 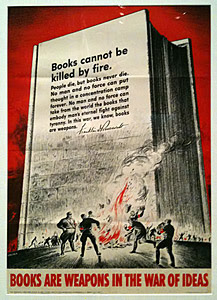 Of course, banning and/or challenging books, particularly in schools (e.g. this previous post), is still with us, but thankfully not to the extent it was in the period the exhibition focussed on. There were certainly works that were still "scandalous" and certain standards of "decency" were still imposed in movies and television for several more decades. (One could certainly make an argument that is still the case given restriction on certain language and nudity on broadcast television and the movie rating system and age-restrictions it carries. Not to mention fines for "wardrobe malfunctions".) For the most part though, the challenges on grounds of morality, decency, etc that arise today are by private organizations or individuals, and not government censorship.

This was the only other photo I snapped in the exhibition, since the proud label on the cover amused me and all I could think of was "The Library" episode of Seinfeld. 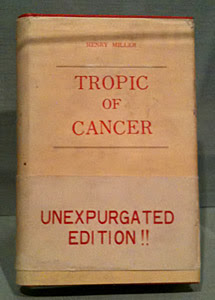 It was a fascinating collection of materials and I was glad that I had a chance to see it. Now I'm eagerly awaiting the next big exhibition coming to the HRC - The King James Bible: Its History and Infuence.This will be the only other US venue for the exhibition that just concluded its run at the Folger Shakespeare Library in Washington D.C. The main thing I'm looking forward to is the material on the Bible before the King James edition, which of course is closely related to my interest in Tudor History!


at January 22, 2012
Email ThisBlogThis!Share to TwitterShare to FacebookShare to Pinterest
Labels: Museums