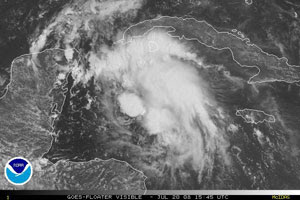 Yes, I know I won't be the first or last person to say that in regard to the new tropical storm that formed just east of the Yucatan peninsula. The storm is expected to move into the Gulf of Mexico in the next couple of days. Right now the track takes it into Texas at the Mexico border as a tropical storm.

The reasons for this little bit of weather-blogging are 1) I'm a weather junkie and 2) I was born in the Rio Grande Valley of Texas and lived there and in Houston for the first 8 years of my life, so keeping an eye on tropical weather was something I got from an early age. Even now, living in central Texas, we still have to deal with tropical weather, and not just from the stuff that comes in from the Gulf. We sometimes get the remnants of Pacific storms coming in from Mexico and dumping lots of rain on us.

Since we're having a pretty hot and dry summer here this year, a nice soak from a minimal tropical storm wouldn't necessarily be a bad thing. Right now the forecast doesn't take Dolly to hurricane strength, so maybe she'll turn out to be one of those helpful storms. But of course, we all know how quickly the forecasts for the path and strength of a storm can change! 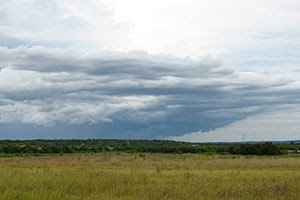 Well, Dolly has now come and gone, leaving a lot of rain in the Rio Grande Valley. We got some here in Central Texas (see the view from my back porch on Wednesday evening), but not as much as I had hoped. It looks like the Valley took a fairly bad hit, but so far I haven't heard anything of deaths or serious injuries, so that's good.

The trend is pointing towards an active season, although I can't imagine that we will see anything like the historic 2005 season. Only time will tell, but let's hope that if it is a repeat of the 2005 activity, it isn't also a repeat of the failures of that hurricane season.
at July 20, 2008
Email ThisBlogThis!Share to TwitterShare to FacebookShare to Pinterest
Labels: Weather