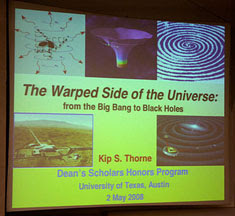 I meant to write about this shortly after the talk so I wouldn't forget stuff, but of course here I am over two months later trying to remember all the mind-bending (and space-time bending) things he discussed.

Kip gave a lecture at UT back when I was a student (c. 1993?), so that was the last time I heard him speak in person. This time he came after being invited by two undergraduates, one of whom was my department's recently-selected Rhodes Scholar Sarah Miller (we're all quite proud of her!) and he made a point of mentioning that the reason he accepted the invitation was because it was students who asked, which I thought was very cool.

The talk was a good overview and synthesis of where we've come from and where we are going in the study of some of the weirdest parts of physics and cosmology. He started with an overview of relativity, black holes and the big bang and evidence for all of these. He spent a bit of time covering the search for gravity waves (which I think is what he talked about back in the 1990s when I last saw him) and the plans for upgrades to LIGO. He also spoke to the future areas of research for the primarily student-populated audience, especially areas like inflation and grand unified theory.

I'll leave you with a picture of the man himself, holding a black hole: 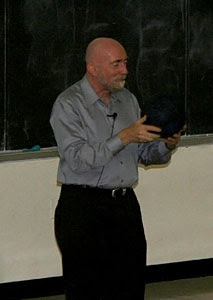 at July 22, 2008
Email ThisBlogThis!Share to TwitterShare to FacebookShare to Pinterest
Labels: Astronomy and Space, Science