Picture of the Week #2 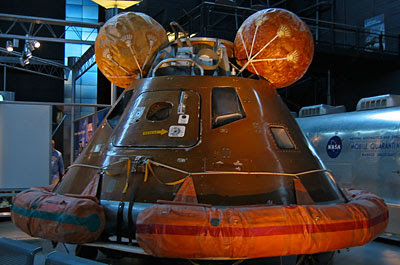 In honor of yesterday's anniversary of the first Apollo moon landing, here is a photo from the National Air and Space Museum Steven F. Udvar-Hazy Center of the Apollo Boilerplate Command Module. I visited the center in September 2006, which was my first visit to the new facility, which is amazing to an air and space junkie like me.

From the information plaque at the museum:

NASA built several "boilerplate" Apollo command modules for testing and to train astronauts and other mission crew members. This one is made of aluminum with a fiberglass outer shell and has an actual command module hatch. It was used by Apollo astronauts, including the crew of Apollo 11, the first lunar landing mission, to practice routine and emergency exits. The interior was later fitted with actual or mockup components to simulate the Apollo-Soyuz spacecraft and the five person rescue vehicle planned for use if an emergency developed during the Skylab program.

Boilerplate #1102A is displayed here with the flotation collar and bags that were attached to the Apollo 11 command module Columbia when it landed in the ocean at the end of its historic mission.

at July 21, 2008
Email ThisBlogThis!Share to TwitterShare to FacebookShare to Pinterest
Labels: Astronomy and Space, Museums, Picture of the Week, Science